[Blind Gossip] Expect a pregnancy announcement in the next week or two from this successful actress!

She is in a committed relationship, so there’s nothing very scandalous about it. However, they have been trying for a while to have this baby, so it’s still noteworthy. And happy!

She may lie about the dates a little for privacy reasons. We hear that she is just about 12 weeks along, which puts her delivery at the end of the summer/very beginning of fall. Just in the nick of time to take a funny photo of the baby in a pumpkin!

[Optional] Did you ever lie about your pregnancy dates? The couple just announced that they are expecting their first baby!

As we said, they are in a committed relationship and there is nothing scandalous about the pregnancy. Just happy news.

Now, about those dates…

We knew that Nikki was approximately three months along when we originally posted in March. That’s why we figured that she would be announcing shortly. After all, once the first trimester has passed, it’s usually safe to announce, right?

When they finally DID announce, here’s how big Nikki was: Whoa! Given the size of her belly, she certainly does look to be at the end of her second trimester now. We stand by our original estimation that the baby will be here at the end of the summer/beginning of fall.

Did you catch the two big clues in the last paragraph?

We told you that her delivery will be “…at the end of the summer” and that it will happen “just in the nick of time to take a funny photo of the baby in a pumpkin!”

Despite the clues, nobody got this one right! However, it’s nice to see that you are all still pulling for Cameron Diaz… 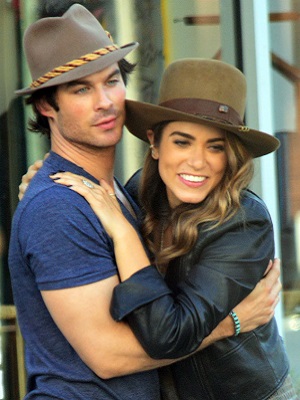 If you are looking for a photo, you’ll have to wait a while.

The actors/ activists said that they will be having a “month of silence” with “just the three of us, no visitors, and we’re turning off our phones too so there’s no expectation for us to communicate. Otherwise, every five minutes it would be, ‘How are you feeling? Can we have a picture?’ You don’t get those first 30 days back and we want to be fully present.”

Congratulations to Ian and Nikki! We want that pumpkin photo!