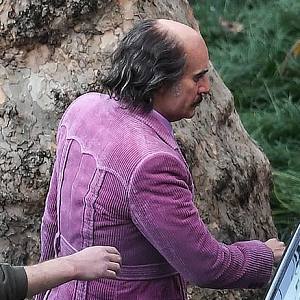 [Blind Gossip] This actor has been in some big movies and is currently part of a successful franchise.

When he was caught outside recently, we did not recognize him.

It’s the little things that seem to be throwing us off.

It’s not the purple jacket, as he has always had a unique sense of fashion.

It’s not because he was walking instead of running.

Perhaps it’s because he looks so much older than the last time we saw him?

We’re probably not buying into the hair. It’s not very flattering.

We recall one of his standout roles where he had blond hair. A full, thick, dreamy head of blond hair.

We’ll give you a few seconds to adjust your eyes and try to figure out who this is.

Don’t panic if you don’t get it right away. Nobody’s perfect!

By the way, he has something in common with the person in the Similar blind item below.