[Blind Gossip] This blind item is just plain wild, so hold on!

There is a famous celebrity family. Actors, actresses, singers. Let’s focus on two of the brothers.

Older Brother – who is a very famous and very talented actor – was formerly married to a gorgeous actress. He is now married to a civilian.

Younger Brother – who is also an actor – is married to a famous singer.

When Older Brother married Civilian, he wanted her to get pregnant right away. She didn’t. Afraid of losing her husband, she found a willing sperm donor. His younger brother!

But wait! That’s not the end of the story!

Older Brother got suspicious about the paternity of his kids… and got them DNA tested! He was so furious about the results, that he and Civilian had a huge fight. When we say huge, we are talking epic! Older Brother is known for his temper. There was screaming and swearing, a chair was thrown through a window, and Civilian walked out… straight into the arms of Younger Brother!

The whole family went into a complete meltdown. There was huge infighting among a dozen family members for weeks. All of a sudden, nobody was sure whose kids were father by which brother. All of these revelations and family secrets were thrown into the mix. It was a mess.

Want to know how things ended up? Of course you do!

BONUS CLUE! We found out that Older Brother yelled at Younger Brother, “Nobody makes a fool out of me!” On Saturday, Older Brother will be announcing his plan for revenge.

[Optional] Which brother would you rather be married to? 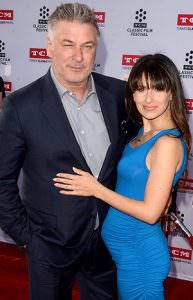 Wow! This is one crazy story!

During the early part of their marriage, Alec was impatient about creating a family with Hilaria.

Afraid that Alec might leave her, Hilaria turned to Alec’s brother Billy for help.

Alec just found out that Billy is the biological father of Alec’s three young children!

After a massive fight, the whole family is in turmoil. No one knows whose kids were fathered by whom. 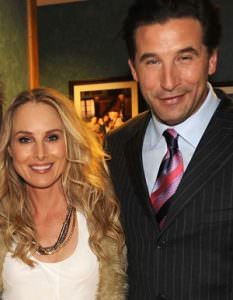 We don’t know if or when divorces will be announced.

For now, the entire Baldwin family is keeping this story a secret. Can’t say we blame them!

Did you catch all the clues? Hold On was a Wilson Phillips song, Daniel Baldwin appeared on the TV show Wife Swap, and Billy Baldwin played William Wild Bill Eustace on Copper. The photo was also a clue, as Alec Baldwin famously created an uproar as a passenger on a plane when he refused to stop playing a game on his phone.

Congratulations to KitKanuck for being first with the correct answer!

Scroll down to see an EXCLUSIVE of the new couples in the Baldwin family!

The idea for this year’s April Fool’s blind came from…. Hilaria Baldwin herself!

The yoga enthusiast posted a photo of herself doing a yoga pose with Billy Baldwin captioned “The Baldwin Swap.”

That got us thinking…. and an April Fool’s Day joke was born! 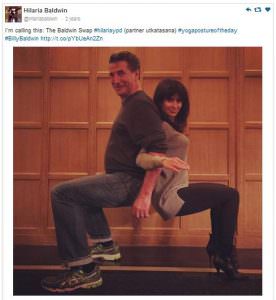