[Blind Gossip] This famous athlete got married in the past year to a very vocal celebrity.

All of their friends and family gushed about how happy they were and what a great match the couple made.

Well, almost all of them.

Want to know who wasn’t so thrilled? Her parents!

They don’t like him, they don’t approve of him, and they think that the marriage is a sham.

When the daughter got engaged, her parents began to fight with her and each other about whether or not she should marry him. After the wedding, they kept fighting.

The couple is still together… but the parents split up!

[Optional] Do you think that their marriage is authentic? 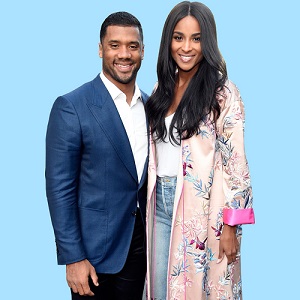 Your friends at Blind Gossip told you two years ago that Ciara’s parents had split up over Ciara’s relationship with Seattle Seahawk’s player Russell Wilson.

Ciara is opening up about a recent change in her family’s dynamic.

In a preview for a new episode of RuPaul‘s self-named talk show, Ciara, 33, revealed her parents Carlton and Jackie Harris have split.

“My parents were married for 33 years and they’re not together anymore,” Ciara said, fighting back tears.

“However, they are both happily married so it’s good,” Ciara explained, prompting the audience to erupt in applause.

While the “Level Up” singer is happy her parents have found love again, she shared their divorce was a “very out of body” experience for her.

“Imagine you go for 33 years of mom and dad being together and when I had my child, my son, my first child [Future], I was like, I just know mommy and daddy that made [a] baby was what the scenario was supposed to be,” she said.

“That was like, whoa, when that happened,” she added.

Ciara went on to reveal that her parents separated when she began dating now-husband Russell Wilson.

Ciara and Russell’s relationship began in 2015, and they got married in 2016. They welcomed daughter Sienna in 2017.

Notice that the problem began after she started dating Russell Wilson.

We told you that their Ciara’s parents fought a lot over Ciara’s relationship with Russell Wilson and that they split up as a result. It took a couple of years, but Ciara is now confirming the timing of her parents’ separation.

Although they call the split “recent,” this all happened so long ago that the parents have already remarried!

Ciara and Russell Wilson are still married and the parents of a little girl. Ciara also has a son as the result of a previous relationship with the rapper Future.

Congratulations to Virgo826 for being first with the correct response!