[The Independent] A “well-known” entertainer has prevented The Sun on Sunday from printing details about his extra-marital activities.

Judges ruled PJS’s right to “private and family life” overrides The Sun on Sunday’s right to publish an article about his infidelity, under laws on freedom of expression.

This is the first injunction to reach the Court of Appeal for five years and is predicted to prompt the latest series of legal disputes between celebrities and the press over privacy injunctions.

The entertainer is reported to have had a realtionship with another couple over four years ago.

“In 2007 or 2008 the claimant met AB. There is a conflict of evidence as to whether they met through a mutual friend or on Facebook. The claimant and AB had occasional sexual encounters starting in 2009,” Lord Justice Jackson explained in the appeal court judgment.

“AB already had a partner, CD. In a text message exchange on 15 December 2011, the claimant asked if CD was ‘up for a thre*-way’. AB said that CD was. Accordingly, the three met for a thre*-way sexual encounter which they duly carried out. After that encounter, the sexual relationship between the claimant and AB came to an end, but they remained friends.”

The “committed couple” approached Steve Kennedy, the editor of The Sun on Sunday newspaper, just a few months ago in January and told him about their relationship with the prominent figure.

The newspaper, which had been planning on publishing the story, got in touch with the entertainer’s lawyers who claimed the story would be an invasion of privacy, in turn prompting a courtroom dispute.

In the end, the court of appeal ruled the newspaper could not publish the story because the entertainer, who has an “open relationship” with his wife, had an expectation that his sexual activities would remain private.

The judge also took into account the effect the likely to ensue “media storm” would have on the young children of the couple. In their words, “The children would become the subject of increased press attention, with all that that entails”.

Similar: The Most Notorious Three

[Optional] Yes or No: If a public figure is having an extramarital affair, should the media be able to factually report it?

A similar article in The Guardian was just amended to change “wife” to “partner” as stated in the judgment. Therefore, the original couple may be a same sex couple.

The couple participating in the thre* way (though not celebrities) may also be a same sex couple, as they are simply described as a “committed couple.” While the super injunction bars the U.K. media from publishing the names of the celebrity involved, the U.S. media is unaffected.

It looks like all four of the people described in the original blind item are male, which would make sense given the update that changed the descriptors used to describe the people involved.

We are publishing the identities today because there is no legal reason not to publish in Scotland what has been banned in England and Wales.

Their big secret is no secret at all. America knows. The internet knows. The whole world knows.

So now Scotland knows. And so we should. 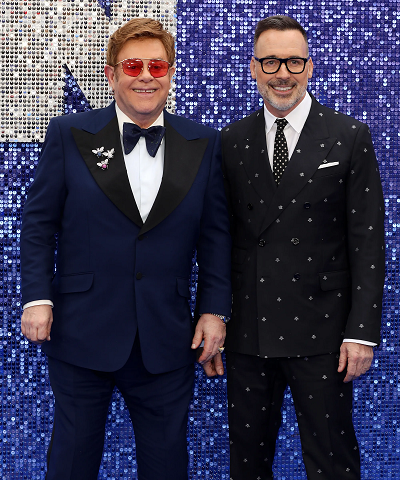 The National Enquirer was the first out of the gate in the U.S. to run a similar story to the super injunction story. They scored an interview with a businessman who claims that he was David Furnish’s lover.

The brief online article mentions that David Furnish took part in gay thre*some (which may have been a way to simply throw Furnish under the bus instead of Elton John).

In a blockbuster world exclusive interview, a handsome London businessman has told The National Enquirer that Elton John’s husband David Furnish was his lover for nearly three years — and they carried on their sordid affair while the superstar and his two young sons were at home!

For more explosive details, pick up The National Enquirer— on newsstands from today.

Perhaps AB from the original documents = A Businessman? What do you think PJS and YMA stood for?

It has gay thre*somes, a Canadian, olive oil wrestling and one of Great Britain’s most legendary celebrities.

But while Americans, Scots and anybody with an internet connection can read the salacious details of Sir Elton John’s open marriage, a controversial injunction could put English and Welsh journalists in jail if they report the same.

“This is an absolute farce,” British MP Philip Davies, a member of the Commons’ justice select committee, told U.K. media.

The story, as reported last week in the New York-based National Enquirer, is that David Furnish, the Canadian husband of Sir Elton John, has carried on a lengthy affair with British businessman Daniel Laurence.

The three-page exposé detailed trysts in luxury hotels, thre*somes and even a bout of olive oil wrestling, but despite Enquirer claims of Furnish’s “betrayal,” the whole affair appears to be in keeping with the couple’s open relationship.

We want to hear more about the olive oil wrestling! 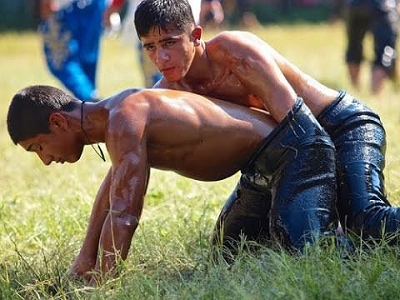 In other news, Elton John is now being sued in Los Angeles by a former bodyguard for “twisting his nipples and grabbing his [redacted].” It is also alleged Sir Elton tried to place his fingers between the bodyguard’s buttocks and told him to “get your todger (p*nis) out” and to “say hello to Uncle Elton.”

Sounds like every day with Uncle Elton is full of pervy weirdness!

Congratulations to Ruled2 for being first!

The Enquirer […] reports that lawyers for John say he knew about the relationship [with British businessman Daniel Laurence]. According to Laurence’s account, Furnish had unprotected sex with him at least twice (an allegation John’s lawyers deny in the report) and Furnish joined Laurence and husband Pieter Van den Bergh in a Dec. 2011 thre*some that involved cavorting in a kiddie pool filled with olive oil. Why was Elton John been working so hard to suppress the British press from publishing the details of his extra-marital sex story?

Sure, the admission of an open marriage, the extra-marital sex, the thre*somes, and the olive oil kiddie pool makes for great gossip.

However, the real story here is the unprotected gay sex with strangers!

The unprotected gay sex issue is a big deal because Elton John and David Furnish have been long-time fund-raisers for AIDS.

In fact, their OWN charity, The Elton John AIDS Foundation (EJAF), has raised over $300 million to fight AIDS. An example of the fund-raising is the posh post-Oscars EJAF party Elton John throws every year.

Since Elton John has admitted that he and his husband are in an open marriage, Elton John himself has been complicit in acts (having unprotected gay sex) that are known to spread AIDS.

By engaging in such risky and irresponsible behavior, Elton John and David Furnish have managed to completely undermine the Foundation’s mission!

That is likely the real reason Elton John fought so hard to cover up this story and threatened to sue anyone who published it.

It is NOT about Elton John being a celebrity.

Or a father whose children could be subject to ridicule.

Or about men engaging in private and consensual adult behavior.

It’s about the staggering hypocrisy of a huge and public AIDS charity that rakes in hundreds of millions of dollars… while its founders concurrently engage in risky, unprotected sex with multiple strangers!

That is the real story here.