[BlindGossip] Just a few short weeks ago this underage star stood on a table in a club screaming “Shots! Shots! Shots!” and downing alcohol until she could barely stand. The alcohol was purchased for her by her much older boyfriend.

Then she went and did line after line of c*caine in the bathroom. The coke was provided to her by her friendly neighborhood dr*g dealer (with whom she got matching tattoos).

Despite having completed rehab in early 2011, it was clear that our party monster was once again out of control.

It didn’t last long. Less than a week.

Then she was pulled out to go back to work.

Of course, that strategy didn’t work, so in February, she checked into rehab yet again, this time at a different facility. Based on the seriousness of her alcoholism and coke addiction, her doctors recommended a six-month stay.

She was pulled out after two weeks.

It doesn’t take a genius to know that you can’t rid a drunk, cutting, eating-disordered, bi-polar c*kehead of her demons in two weeks.

This poor girl has had so much emotional trauma in her life that there is no quick fix to her problems. She needs intensive help over a long period of time. She also needs to purge herself of all of the enablers and liars and sycophants who surround her on a daily basis and exacerbate the problem.

Yet, there she is, back at work, smiling and performing for her fans and pretending that everything is great.

She is also promoting a television special on – wait for it – how she has stayed strong and sober and sexy for the past year.

It’s not about genuine recovery. It’s about PR. There will be no mention during the special about her severe relapse and her health scare and the two more stints in rehab this year. Those were “vacations” and “retreats”. Unfortunately, as long as the lies and the hypocrisy continue, so will her disease.

She needs to take a solid six months off to do nothing but get well. The fact that she is constantly being yanked out of rehab and thrown back into the work force because so many people and shareholders rely on her income is both disgusting and sad.

Shame on the mouse.

Shame on the moonman. The events that we described above took place at Beacher’s Madhouse in Los Angeles, where Demi was enabled in her drug and alcohol consumption by her so-called “friends”. 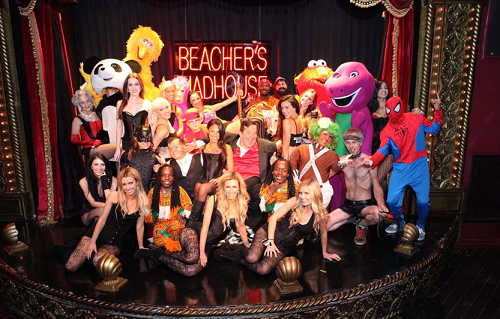 This was after her 2011 stint in rehab and before her 2012 stints in rehab (the latter to which she still has not admitted).

For years, Demi Lovato just made vague references to her problems with drugs and alcohol.

When she went to rehab in 2011, she said it was because of her cutting and bulimia and bi-polar disorder, with nary a mention of drugs or alcohol.

Why? Because her management deemed that they could “sell” the eating disorder and the cutting as being “teen girl” problems, which would make her more relatable to her core audience.

If they had admitted to the bigger issues, parents might have tried to pull their little girls away from their favorite “role model.”

Blind Gossip has been telling you for years that alcohol and c*caine are huge problems for Demi Lovato. Her fans yelled at us and called us liars. So did her management team. So did Demi. So did other gossip sites.

Well, Demi Lovato is finally starting coming clean about her raging alcohol and c*caine addictions, and the lies she told to herself and others to hide it.

Demi just did an interview with Access Hollywood this week, where she basically confirmed everything that Blind Gossip has been telling you all along: That she has serious addictions to both cocaine and alcohol; that she lied repeatedly about being sober; and that she was using drugs and alcohol even while accompanied by a sober companion and living in a “sober house” facility.

The New York Daily News summarized it this way:

Demi Lovato has been vocal about her struggle with bipolar and eating disorders, but the 21-year-old former Disney darling revealed for the first time that she had an addiction to cocaine that was so intense, she couldn’t go without it up to “30 minutes to an hour.”

And here is the first part of her interview with Access Hollywood:

I Would ‘Smuggle’ Cocaine On Planes

Demi Lovato is speaking out about her past drug use in a very candid new interview with Access Hollywood’s Kit Hoover.

The 21-year-old star, who wrote her memoir “Staying Strong: 365 Days a Year,” opened up to Kit from the set of “The X Factor” on Monday.

“I’m very, very good at manipulating people and that was something that I did in my disease, I would manipulate everyone around me. There were times I would just continue to lie, so that everything looked OK on the outside,” she told Kit.

In fact, Demi said she went to great lengths when it came to ensuring she could use drugs wherever she was.

“Something I’ve never talked about before, but with my drug use I could hide it to where I would sneak drugs. I couldn’t go without 30 minutes to an hour without cocaine and I would bring it on airplanes,” she revealed. “I would smuggle it basically and just wait until everyone in first class would go to sleep and I would do it right there. I’d sneak to the bathroom and I’d do it. That’s how difficult it got and that was even with somebody [with me], I had a sober companion, somebody who was watching me 24/7 and living with me [and] I was able to hide it from them as well.”

Demi’s rock bottom – at just 19 years old – was found at the bottom of a soda bottle.

“I was going to the airport and I had a Sprite bottle just filled with vodka and it was just nine in the morning and I was throwing up in the car and this was just to get on a plane to go back to LA to the sober living house that I was staying at…I had all the help in the world, but I didn’t want it,” she said looking back. “When I hit that moment I was like, it’s no longer fun when you’re doing it alone. I’ve really never talked about this stuff before… I don’t know if I should be sharing this.

“I think at 19 years old, I had a moment where I was like, ‘Oh my God… that is alcoholic behavior. [It’s] no longer, I’m young and rebellious and out having fun, it was, wow, I’m one of those people…I gotta get my s*** together,’” she explained.

Demi’s mom, Dianna, also sat down with Kit for the interview, where she recounted dealing with her daughter’s addiction battles.

“I suspected [she was using drugs]. It’s like any other parent, when you see things, when you see signs you don’t want to believe that’s what actually going on. So when they’re telling you that’s not what is going on… you want too badly to believe them and I think for a long time I was in denial,” she told Kit.

“I didn’t know. I didn’t actually see her, so when she said, ‘Oh no, There’s nothing going on. I’m not using, I’m not drinking, I wasn’t doing any of these things,’ Why was I not to believe her?” Dianna continued.

Demi Lovato still hasn’t admitted that she was also in and out of rehab several times in early 2012. Blind Gossip told you that story, too (see Troubled Girl Is Exactly The Opposite), although her team has repeatedly denied it. Maybe she’ll get around to talking about those events in her next book. We hope so, because the story of how they put in and pulled out of multiple rehab facilities over the course of several weeks in early 2012 is an incredibly sad and shocking testament to the warped priorities of her management team.

Nonetheless, we are actually rather encouraged by Demi’s latest admission. The more honest she gets about her issues, the more likely she is to get help and not lie or make excuses about it.

Congratulations to 4sixx2 for being first with the correct answer!