[BlindGossip] She’s off her meds, and it’s not good. She has returned to the very behavior that got her into so much trouble in the first place, including the drugs and the alcohol and the self-harming.

It’s almost surreal to hear her spouting absolute bullsh*t about being healthy and happy and sober when she is exactly the opposite. In fact, we know that just a week ago she was out at some madhouse of a bar, drunk off her ass, doing multiple shots and snorting coke in the bathroom.

Let’s cut to the chase, and get more direct: Look, we know that you and your friends are reading this. It is absolute madness for you to think that this will end well. You are a beautiful and talented girl, but you ARE going to lose your fans and your career and perhaps  your life if you keep this up.

Remember how upset one of your siblings was when someone picked on them? Do you realize how much more emotionally destroyed they would be if you actually died?

You should think about that, because that is exactly where you are heading right now. We don’t care if you lie to people about what your problems are. We don’t care if you pretend that you are going on vacation. Just get yourself back into rehab (or treatment, if it makes you feel better to call it that), and get well. Now. Blind Gossip readers are the first to learn the following:

Demi Lovato will be entering in-patient treatment for alcohol addiction and addiction to drugs, most notably cocaine.

Demi Lovato has been living a double life. She was promoting “Sober is Sexy” during the day… and drinking and drugging at night!

We know that Demi and her friends read Blind Gossip every day, so when we heard that she was slipping back into destructive habits, we decided to address her directly.

Several of her friends told us that Demi did, in fact, read the blind, and was very upset by it. She was especially furious that we were “dragging her little sister into this.” Her friends recognized that there really was a problem, and decided to pass our blind item along to her family and management team. Within 24 hours, they intervened, and Demi is now in rehab.

We are very happy that Demi will now be getting the help she needs. Whether or not our blind item provided the catalyst to push her toward treatment is inconsequential. The most important thing is that she gets well and has the opportunity to lead a happy and successful life. Demi, we wish you nothing but the best.

ADDENDUM: Demi Lovato’s PR team has asked BG to let its readers know that, as of today, 1/25/2012, Demi Lovato is NOT a resident at an in-patient treatment center. They will not confirm her sobriety and will not be releasing any statements about her sobriety or her personal health. They claim that Demi will be publicly seen and photographed out in Los Angeles later today when she goes to a medical appointment. 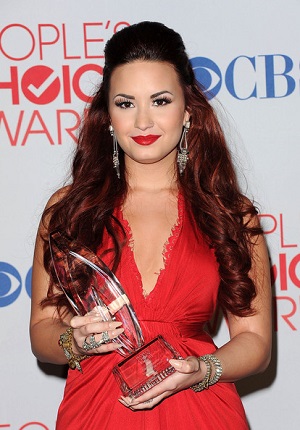 After BlindGossip.com published the original blind item back in January 2012, we got an email.

It was supposedly Demi Lovato herself, yelling at us!

She claimed that she was completely sober, called us liars, and threatened us with legal action if we didn’t take the post down.

(No, we’re not going to publish the email exchange. We don’t do that sort of thing. Just know that it was very long, very detailed, and she was very angry.)

We knew that we had our facts straight. We knew her friends. We even knew her drug dealers.

We knew that Demi Lovato was promoting her sobriety during the day and doing massive quantities of drugs and alcohol at night. We refused to take the blind item down, but we did add the addendum that her team requested.

So, what was the truth?

Well, it took five years, but guess who has finally confessed that she was, in fact, lying about her sobriety in 2012?

Demi Lovato was in fact, the coked-out drunk at Beacher’s Madhouse that we described to you in the original blind item. And, yes, she did have to go through rehab again.

In a new documentary, Lovato finally admits that she was using drinking and using drugs at the same time that she was promoting her sobriety in 2012.

Despite promoting a “sober lifestyle” in 2012, Demi Lovato was still using drugs, she reveals in her new documentary.

“I wasn’t working my program, I wasn’t ready to get sober,” Lovato, now 25, explained in “Demi Lovato: Simply Complicated.” “I was sneaking [cocaine] on planes, I was sneaking it in bathrooms, sneaking it throughout the night … I went on a bender of like, two months where I was using daily.”

“There was one night when I used a bunch of coke and I popped a few Xanax bars, and I began to choke a little bit. My heart started racing, and I thought to myself, ‘Oh my God, I might be overdosing right now,’” the “Hitchhiker” singer said.

Lovato’s manager, Phil McIntyre, recalled, “We were in New York and she clearly was on something, and she was on air promoting this new way of life, and I was like, ‘You’re so full of it.’”

McIntyre reached out to Mike Bayer, Lovato’s sober coach and CAST Centers partner, for help, but it was neither an easy nor a fast process.

Following an incident in Palm Springs where the singer downed half a bottle of pills, Lovato was temporarily placed in a psychiatric unit, but continued to use drugs.

“I would sneak out and get drugs, I would fake my drug tests with other people’s pee,” she admitted.

Lovato recalled that the last night she ever abused any substances, booze was the poison she picked.

“The very last night that I drank, I was at a hotel, and I invited two random people and basically just drank with them,” she said. “I got really, really drunk until it was time to get on a flight, and I was so drunk that I threw up in the back of the car service on the way to the airport to perform on ‘American Idol.’”

The “Give Your Heart a Break” singer was hung over during her performance, and her professional team almost gave up on her, which is what led her to finally get sober.

“The most important thing to Demi is losing people, losing people that she cares about and that love her,” Bayer said.

Bayer worked with McIntyre to intervene.

“I worked with everyone on the team — business managers, agents, attorneys, everybody, to say, ‘If Phil walks, we walk,’” McIntyre said. “This was the showdown of all showdowns.”

A sobbing Lovato asked what she needed to do to get those close to her to stay, at which point Bayer demanded she relinquish and destroy her cell phone, which contained contact info for drug dealers. He wasn’t satisfied with her simply smashing it, and her team ordered her to drop it in a vase full of water while they watched.

“It’s embarrassing to look back on the person that I was,” Lovato said, adding, “I think that approach worked for me because … it was the beginning of the process of surrendering.”

We wish Demi Lovato well in her recovery.