[Blind Gossip] You already know that Woman 2 annoyed her way out of a job. Well, we have some information on the timing of her termination. She won’t last the year. She will only last as long as a significant summer event continues. Then she will have to say sayonara to her sweet gig! 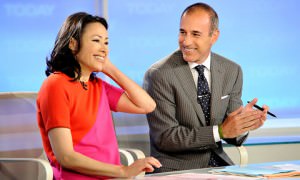 Ann Curry was supposed to be phased out over the course of the Olympics. Now it looks like she is getting bumped before the Olympics even begin! From The New York Times:

Mr. Lauer has said that the ratings have put “Today” on notice. In early April, just before the win by “G.M.A.,” he renewed his contract at “Today,” putting to rest months of speculation about how badly the show would be damaged if he departed. Ms. Curry’s departure, similarly, could hurt “Today;” if viewers perceive that she was forced out, they may become alienated and literally turn it off as a result.

This concern, expressed repeatedly in the last six months, has slowed the process of replacing Ms. Curry, according to people at the network. But the process is now clearly under way, and executives in the television news industry believe that changes to Ms. Curry’s role on “Today” could be announced as early as next week.

The timing is delicate because in late July, NBC begins to broadcast the Summer Olympics; the “Today” show is part of the coverage, transplanting its studio to the host city.

“They feel real pressure to get it done by the Olympics,” one of the people with knowledge of the negotiations said. That way, “Today” can go to the Games with a complete, comfortable team of co-hosts. The Olympics-related shows typically get a big ratings bounce, just the sort of thing it needs to fend off “Good Morning America.”

Some at “G.M.A.” are happy to have the uncertainty about Ms. Curry linger, because they believe their show is benefiting from it. It is conventional wisdom in morning television that chemistry among hosts is a hugely important factor in viewers’ decisions about what to watch. It is also conventional wisdom that the “G.M.A.” cast now has the better chemistry.

Mr. Lauer and Ms. Curry notably lack the kind of on-camera rapport of Mr. Lauer with Ms. Vieira and, before her, with Ms. Couric. This month they’ve been apart almost as many mornings as they’ve been together; when “Today” went to London for the Queen’s Jubilee on June 4 and 5, Ms. Vieira sat in Ms. Curry’s place. In recent interviews, Mr. Lauer has described his relationship with Ms. Curry as a transition. In one, on CNN last month, he said she has “the biggest heart in broadcasting.”

Congratulations to KJC520, who was the first to get this one right!