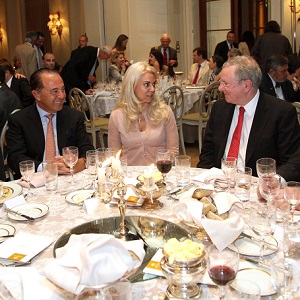 [BlindGossip] At an Upfronts luncheon, three young television series stars – all female and all thin – were seated with various advertisers and executives.

Star 1 was very friendly and down to earth. She talked about how lucky she was to be a working actress, and made sure to take photos with anyone who asked. She ate her entire lunch, including dessert. Advertisers commented on how healthy and gorgeous she was, and how nice it was to see a girl who would eat and who made everyone at the table so comfortable.

Star 2 initially sat at her table, but was incredibly antsy and jumped up and left every time food was presented. Salad course? “Oops, sorry, I’ve got to take this call.” Entree? “Time to use the ladies room.” Dessert? “I have got to go talk to so and so.” When she was at the table, she just chewed gum and fidgeted while everyone else ate. It was very awkward for the entire table of advertisers and TV execs, several of whom commented that she looks like she has an eating disorder.

Star 3 kept discussing her “craft” when speaking with the advertisers, several of whom rolled their eyes. “She’s on a TV show popular with teens for God’s sake, not an Oscar-worthy film” one of them told us. She also made it known she doesn’t believe in being a spokesperson for “crap to be sold.” Keep in mind that she said this to a table full of advertisers. Guess she doesn’t realize that not everyone is lucky enough to have a rich Daddy in the business. Oh, and she ate absolutely nothing, although she did once pick up a lettuce leaf and examine it.

ADDITIONAL CLUE: The three girls are all on the same show. Shay Mitchell consistently gets rave reviews from everyone we know for being a normal, down-to-earth girl.

Shay, her parents, and her management team deserve a lot of credit for helping her to keep her head on straight. This girl is in for a long, successful career if she continues to treat people this well!

Lucy Hale’s jittery personality and refusal to eat has a darker explanation. She recently admitted to having a serious eating disorder.

From the cover article in September’s Cosmopolitan (it’s not on their website, but the issue will be on newsstands next week):

“I’ve never really talked about this, but I would go days without eating,” says Hale. “Or maybe I’d have some fruit and then go to the gym for three hours.”

She adds, “I knew I had a problem… It was a gradual process but I changed myself.”

We don’t think Troian Bellisario was trying to be snobby. We think she was trying very hard to be taken seriously as an actress, and not just somebody who owes her career to the fame of her father (the uber-rich screenwriter and producer Donald Bellisario).

Somebody does need to school Troian, though, in how to speak to advertisers. Insulting them and their products is never a good tactic.

Very few of you got this one totally right. Congratulations to Amblen, who nailed it!