[Blind Gossip] During a recent photo shoot, a young male celebrity attempted to hit on a female model who was also on set. According to a crew member, he kept licking his lips and asking her if she wanted to party with him.

She wasn’t having any of it! She told him:

Look, I don’t party. I am married. I am a mother. And I am old enough to be YOUR mother.

While not all of those statements are true, it shut him down quickly enough, and she was able to finish the shoot without further harassment.

[Optional] Model (may or may not be famous):

This all went down during that controversial Calvin Klein underwear photo shoot. You know, the one where Bieber’s body was photoshopped to appear bigger and bulkier. 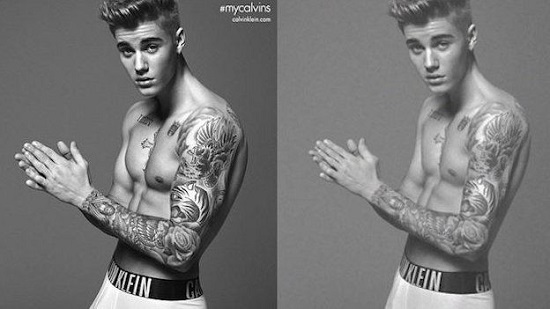 Anyway, as far as the hitting on Lara part of the story goes, Adweek concurs:

“He was basically a *,” the source told the pop music site. “He hit on Lara several times, and she had to stop him, basically calling him out on being just a child.”

Oh, Biebs. While Lara isn’t quite old enough to be your mom (she’s only 31), she is way out of your league. And does anyone really find lip-licking sexy? In other news, the model in this story, Lara Stone is divorcing comedian David Walliams (from Britain’s Got Talent). From UPI:

separate after 5 years of marriage

David Walliams and wife Lara Stone have reportedly split.The 43-year-old Britain’s Got Talent judge and 31-year-old Dutch model are said to be on a trial separation after nearly five years years of marriage. The Sun reports Stone left the couple’s home this week with their 22-month-old son and pet dog.

“David has been putting on a brave face. But people close to him are very worried because they know he’s devastated,” a source told the publication. “[He] hopes it is a blip and that they can get the marriage back on track somehow, especially seeing as there is a child involved.”

You know it’s serious because she TOOK THE DOG! We don’t think the split has anything to do with The Biebs, but you never know. Just kidding. But seriously, folks, if you want to inject some conspiracy into their divorce, one of David’s co-hosts has observed that David and Lara’s youngest child looks just like… Simon Cowell! Upon hearing that rumor, even the dog said, “Ruh ro…”