[BlindGossip] This good-looking and award-winning male actor has always been known as being rather vain.

That’s why it should come as no surprise that he asked the director to help him mask his weight gain (he is a good 25-35 pounds heavier than when he first landed the role).

He is especially self-conscious about how he appears when filmed from the side.

We don’t think he looks that bad with the extra weight (he has always been built like a tank), but the wardrobe person has fitted him with a men’s compression girdle to help smooth him out.

Just don’t expect to see him unbuttoning his suit any time soon. Handsome Alec Baldwin started gaining considerable weight in his second year on 30 Rock. There were some scenes where he was stuffed so tightly into his mirdle that he could hardly breathe. We don’t think he unbuttoned his Jack Donaghy suit for the next four years!

In the last year, though, he’s lost the extra weight. He credits a diet free from sugar and flour, as well as having taken up yoga (his new fiancee is a yoga instructor). He looks gorgeous and healthy, and we’re sure that the mirdle has now been retired. 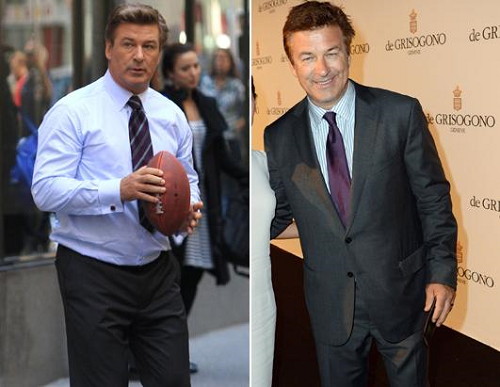 Mask = The Shadow, Tank = [Alec is the voice of] Thomas the Tank Engine

Congrats to Super Sleuth, who was first with the correct guess and who nailed both clues! Impressive!

Special mention to InTheBiz, who knows that “In NYC, the costumers sometimes call The Mirdle ‘The Baldwin’.”

Previous Post: « Actor Actually Knows How to Read a Book
Next Post: No One Buys This Actor’s Sudden Engagement »