[Blind Gossip] It is hurtful when your fiancé cheats on you. It is even more hurtful when it’s with someone you know.

This pretty television Actress found hookup text messages between her Fiance… and one of her television colleagues!

She screamed at The Fiancé about why – of all the people in the world – why would he f*ck around with one of her colleagues? The Fiance couldn’t even deny it. The evidence was right there on his phone.

Our Actress went absolutely ballistic! She yelled. She swore. She threw his phone at him. She broke a few things. Believing that the sexual encounters may have taken place in her bed, she tore the sheets and blankets and pillows off the bed and threw them out.

As you now know, they could not get past the indiscretion, and they broke up.

Which of Our Actress’ television colleagues was hooking up with The Fiance? Just who was Hookup Girl?

The female half of Bullygate!

Allow that to sink in for a moment.

Remember when we told you that Our Actress was unhappy that she was being given the bum’s rush off her television show because the Producers said that they didn’t want too many main characters leaving at once? It seemed like a pretty weak reason at the time, didn’t it?

Well, it turns out that it wasn’t the entire reason. After her affair with The Fiance, Hookup Actress encouraged Producers to push Our Actress off the show as quickly as possible! That’s why Our Actress was going to be given the boot first!

Well, now The Producers aren’t pushing anyone out… and Our Actress is contemplating staying! It’s her choice. Hookup Girl is in agony while she makes it. Things are very, very tense on the set right now. The writers are bracing themselves for more plot changes that will be required if Our Actress stays. What a mess!

This is a BlindGossip.com EXCLUSIVE. In keeping with our Terms of Service, we ask media outlets and bloggers and social media users to clearly and properly credit and link to BlindGossip.com when discussing this story. Thank you for your professional cooperation! Well, the battle is over! 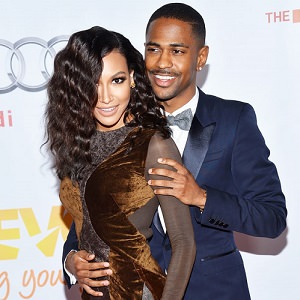 Naya and Big Sean had a huge fight and the two broke up. The details of that fight are in the original blind item.

As you can imagine, when Naya had to go back to work with Lea on Glee, the atmosphere was incredibly tense. 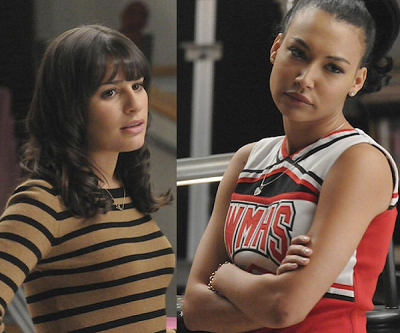 In fact, less than 24 hours after we published this blind item… the two of them had a blowout on the set of Glee!

After that encounter, both sides came out swinging, each accusing the other of being unprofessional/jealous/whatever.

But Blind Gossip readers know what was really behind the tension: The fight over Big Sean.

The whole cast and crew was in an uproar! The producers and writers were already scrambling to separate the story lines of two other feuding cast mates. The entire cast and crew was sick of the fighting and the tension. It was just too much.

Both actresses were called in separately to talk to producers. The situation was untenable, and one of them had to go.

Given that Lea Michele was producer Ryan Murphy’s favorite, take a wild guess at what happened.

Naya – who we had told you was already vacillating back and forth about whether or not she was staying on the show – simply could not compete with Lea Michele for Ryan Murphy’s favor.

Naya was released from her contract and will not be back for next season.

In an very odd statement, the producers acknowledged that Naya was out… and denied that Lea had anything to do with it! “One costar would not have any power in whether another returns to the show,” the production insider told The News, dismissing rumors that Michele had a say in the matter.”

The rest of the cast and crew are definitely not happy that Lea Michele triumphed in this battle. However, they are relieved that the fighting is over and just want to finish out the series in peace.

Congratulations to LCSays for being first with the answer!