[Blind Gossip] These television co-hosts always seem to get along so well that we were shocked to find out that one really can’t stand the other.

Cohost 1 has told her boss that working with Cohost 2 is “beneath me”, that the show “has become ridiculous”, and that she is “losing credibility every minute” she is on air.

She is a true professional, though, so don’t expect her personal feelings to translate on the screen. She will put on a smile and do her job as always.

Hoda Kotb had had enough of drinking wine and making small talk with Kathie Lee Gifford, and was looking to move on this year.

The two strongest possibilities were that she was either going to be moving to the “main” cast of Today or going to The View. However, in the end, she decided to stay on as co-host for the third hour of Today.

with NBC News to stay with “Today”

The deal will ensure that Kotb remains as the co-host of the fourth hour of “Today,” alongside Kathie Lee Gifford. She will also continue to contribute to other NBC News programs, including at her former TV home, “Dateline.”

“Hoda was approached by other networks, shows and syndicators, and after serious consideration, she realized nothing was better than drinking with Kathie Lee Gifford at 10 am on the “Today” show,” a source familiar with the situation told Capital.

Kotb was hotly pursued by ABC earlier this year, with the network promising her a high-profile gig on daytime talk stalwart “The View,” as well as a role with ABC News. While we hear the ABC offer was “compelling,” Kotb’s current home apparently offered the better deal.

ABC pursued Kotb so heavily because “The View” is undergoing a major retooling. After adding Jenny McCarthy this season, the program has been looking for another permanent cast member to join its roundtable. In addition, Barbara Walters will step aside from her on-air role on the program next May, leaving some very large shoes to fill next year.

Kotb has been a staple on NBC News programming since 1998, when she joined “Dateline” as a correspondent. She was named co-host of “Today”’s fourth hour when it launched in 2007 and was also one of the final candidates to replace Ann Curry as the co-anchor of “Today” alongside Matt Lauer. That job ended up going to Savannah Guthrie.

Over the last five years Kotb and Gifford have developed an on-air repartee built around their honest and frank discussions of the news and their personal lives, helped along by a glass of wine or two. The pair recently secured a deal to write a column in the Daily News.

In the ratings, the fourth hour of “Today” has held its own against stiff syndicated competition, including “The View” and CBS’ “The Talk.”

Today decided to stick with Savannah Guthrie, and Hoda did not want to play second banana to her.

The View also made an offer. Yes, Barbara Walters was totally lying about The View never having spoken to Hoda! 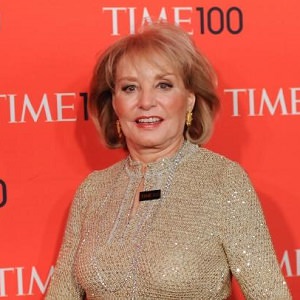 The truth is that The View’s offer was not substantial enough for Kotb. Here are some of the lies that poured out of Barbara’s mouth about this topic:

*There was a report Tuesday that “Today” show co-host Hoda Kotb “had rejected a compelling deal” to join ABC’s “The View,” opting to stay with the NBC morning show’s fourth hour.

Well, this was news to “View” producers Barbara Walters and Bill Geddie.

“I like her a lot,” Walters continued, before gesturing to her co-hosts and saying, “We are not offering any of you a compelling deal either.”

Capital New York reported that ABC News hoped to put her on ‘The View,’ and also make her an intricate part of the network, but that sources confirmed she was happiest at NBC News, where she’s been since her “Dateline” debut in 1998.

Walters couldn’t even pronounce Hoda’s last name correctly while denying the report this morning. New co-host Jenny McCarthy said Kotb wouldn’t like hosting “The View” anyway, because “we only have water in our cups.” (Kotb and her “Today” co-host Kathie Lee Gifford are famous for sipping wine during their broadcasts.)

We happen to know that The Capital New York story is the correct one and Barbara Walters is the liar. Walters apparently stopped being a journalist long ago.

Congratulations to Notellebee for being first with the correct answer!