[BlindGossip] While his name has become almost synonymous with the word “handsome”, this actor was not born a male. He was actually born a hermaphrodite. He had both testicular and ovarian tissue, and ambiguous-looking external genitalia. In other words, he was born with both male and female parts. (Note: Since he was born, the word intersex has come into preferred usage, since the word hermaphrodite is considered to be misleading and stigmatizing.)

The doctors asked the parents to make the difficult decision of selecting one gender for their child. It was a difficult pregnancy and the parents thought they might never have other children. They decided that if they were only to have one child, they wanted a boy.

He was a rather chubby, round-faced child, and he could have easily passed for either gender. He liked to wear his hair long, like a girl, but his parents kept cutting his hair shorter and shorter until he looked like a boy. He  was very curious about girl things. He asked for toys like dolls, and he wanted to wear dresses. However, his parents would never purchase them for him for fear that others would ridicule him. They always dressed him in boy’s clothing. He didn’t want to climb trees or get dirty. He was athletic, but never played typically masculine sports like baseball.

When he was approaching puberty, they began hormone treatments to transition him into a man.  To this day, he still requires steroids to retain his masculine features. There is no question that he does look very manly. He has a square jaw and can grow facial hair. He is able to add muscle to his body to his body for roles that require him to look manly and chiseled. He has had at least two surgeries to extend the length of his penis.

He didn’t tell his first wife about his condition until after they were married. Since they didn’t have sex until they were married, it was easy to hide it from her. She was shocked, but it was not a major contributing factor to their divorce. She did find it weird, though, that he wanted to engage in role play where he was the woman and she was the man.

His current better half thinks that his history is actually rather interesting and kinky. She encourages him to dress up in wigs and makeup and wear women’s clothing when they are alone, which is a tremendous relief to him. Their child/ren are not his biologically, but they are definitely closely related to him. The sperm was graciously provided by his younger brother. 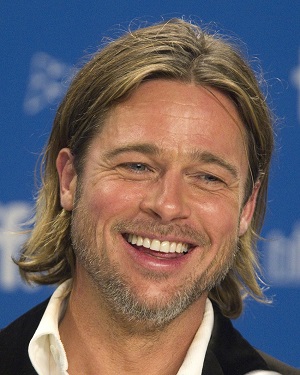 Did you catch all the hints? Curious (Benjamin Button), tree (Tree of Life), baseball (Moneyball).

Congratulations to Londonluv, who was first with the correct guess! Rest assured, Brad Pitt is ALL man (and always has been)!

Happy Sunday, all you April Fools!

P.S. If you would like to read previous April Fool’s Day items, here they are:

World’s Most Famous Couple is Splitting Up