[Blind Gossip] When he was forced to stop drinking recently, this famous film actor needed another way to relieve his stress… so he started eating.

He has only gained eight or ten pounds, but he is not that big to begin with, so it really shows on camera. He has promised to drop the weight quickly.

Until he is completely shipshape, though, wardrobe has to adjust his costumes and the director has to reblock some scenes to hide all his offending body parts.

Aarrgh! Dude, you are totally ruining the continuity!

Wait. We have an idea! Will someone please call Alec Bladwin and see if he can spare his old 30 Rock mirdle? Approximately a month after we published our blind item, Life & Style confirmed our story in their print edition in May, 2015.

This week in Dread Pirate Spanx: Johnny Depp has gained a ton of weight since the last time he played Captain Sparrow and now wears a girdle to fit into the costume.

Since we originally ran our story back in April, Depp has gained even more weight. We don’t know exactly how much, but it looks like he may have packed on twenty or thirty pounds. He’s a smallish guy to begin with (5’9″), so it’s hard for him to disguise the extra weight.

The photo above shows Johnny Depp at the Venice Film Festival last week. He was there promoting his new gangster film, Black Mass.

Wife Amber Heard was there with him, promoting her new film, The Danish Girl. 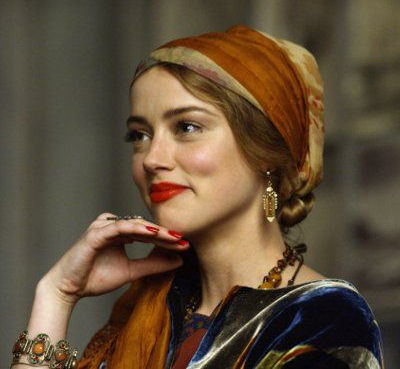 Depp needs a stylist who will help him choose clothing that won’t emphasize his weight gain!

In the photo above, his jacket and shirt fit poorly and make it look like he borrowed the outfit from a guy with longer arms. The light-colored linen pants are just a series of horizontal wrinkles.

In the photo below with Amber Heard, Johnny Depp is wearing a tux, but the jacket is too tight and the pants are too long. By the way, although Depp recently said, “I killed my dogs and ate them,” in response to an inquiry about smuggling his dogs into Australia, we believe that he was only kidding.

Besides, dog meat is high in protein and low in calories, so he would be hard-pressed to blame the Yorkies for his weight gain.

“Shipshape” and “AArrgh!” should have made you think about pirates on the high seas.

Johnny Depp is famous for his role as Captain Jack Sparrow in the Pirates of the Caribbean franchise. Here’s a reminder of what he looked like in the earlier days of that franchise: Congratulations to Justthefacts, who was first with the correct answer AND picked up on both clues!