[Blind Gossip] When adult celebrities choose to act in scandalous ways, we freely talk about it. However, when their children are involved, we are always a bit more hesitant.

In this particular case, though, the way these parents are handling their children is so unusual that we think it is fair game to discuss it. It’s not as weird as wearing a vial of blood around one’s neck, but it is bizarre, nonetheless.

This celebrity couple has more than one child. One or both members of the couple has been married before, and not all of their children are biologically related to both parents. Their children have been raised in the spotlight, and one or more of the children has already started working in the entertainment industry.

They would like their children to be married someday and to produce grandchildren. Pretty normal stuff, right? However, the way that they are going about it is both unorthodox and unsettling.

A former employee told us that the couple has told staff: “The kids have been brought up with a very specific understanding of their role in this world. We expect them to marry someone who fits in so that they can support each other in that role. So we think it would be ideal if they paired off with each other and had children together to carry on the legacy we have created.”

That’s right! They are setting up their children to marry each other! To this end, the parents will be soon be purchasing property in the state of New Hampshire. Although they already own multiple homes, New Hampshire has the lowest marriageable age in the US (13 for the girl, 14 for the boy, as long as they have parental permission and a court waiver). As soon as both children are of age, they will be paired off and married to each other. Furthermore, they found out that if the daughter is pregnant, the court will certainly grant a waiver and that they can pull this off. Although they will continue to live with the parents, the child couple will be encouraged to have as many children as possible in order to continue the family legacy.

So far the children are going along with the plan. They have been carefully groomed to believe that this is a normal and natural arrangement. The whole family has often played “pretend wedding”, with the kids dressing us as bride and groom and going through a pretend ceremony, so that the eventual wedding will come off “without a hitch”. When the time comes, they will be relaxed and ready to “dash” to the altar to do the real thing.

Not everyone in the household staff is cool with this arrangement. One employee has quit and one has been fired in the past year because they believe that it is wrong to force the children to do this, and they have threatened to report the parents to Child Services.

If you are wondering if both parents support this plan, the answer is yes. The woman is so dominant in this relationship (in more ways than one) that the man simply goes along with whatever she says. 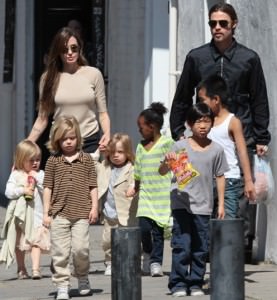 Both Brad and Angelina have a long history of public service.

Given their intense devotion to humanitarian causes, it should come as no surprise that the couple would want their children to follow in their footsteps.

To that end, siblings Maddox and Shiloh (who are not biologically related) will be married to each other as soon as Shiloh turns 13. Brad and Angelina hope that the union will create “super race” of progeny who will carry on the family’s legacy of humanitarian service. The MJP will be renamed The JPSRF (The Jolie-Pitt Superior Race Foundation) to reflect this change.

Celebrity couple Angelina Jolie and Brad Pitt certainly has their hands full. Between two acting careers, six children, and a burgeoning portfolio of humanitarian projects, it is hard to believe that the couple has time for themselves, never mind a new project. However, that is exactly what is happening. Jolie announced their newest project today:

“Brad Pitt, our six children, and I are proud to announce the formation of The JPSRF. The JPSRF is a not-for-profit organization dedicated to the creation of future generation of children whose lives are devoted to humanitarian causes around the world.”

The venture will be initially seeded with a $4.2 million personal donation from Jolie and Pitt, with additional funds to be raised in the future.

If the first coupling is successful, Pax and Vivienne will be married off to each other, followed by Zahara and Knox. Since none of the three couples will be biologically related, there should be few obstacles (other than current social norms) in the way of the family’s plan.

Pitt is passionate about architecture and has narrated Design e2, a PBS television series focused on worldwide efforts to build environmentally friendly structures through sustainable architecture and design. He founded the Make It Right Foundation in 2006, organizing housing professionals in New Orleans to finance and construct 150 sustainable, affordable new houses in New Orleans’s Ninth Ward following the devastation caused by Hurricane Katrina.

Angelina Jolie has worked with United Nations High Commissioner for Refugees and has met with refugees and internally displaced persons in more than 30 countries around the world. After more than a decade of service as Goodwill Ambassador, Jolie was promoted to the rank of Special Envoy. As Special Envoy, she represents the UNHCR at the diplomatic level and works to facilitate long-term solutions for people displaced by large-scale crises, such as those in Afghanistan and Somalia.

In 2006, Pitt and Jolie established a charitable organization, the Jolie-Pitt Foundation (known as the MJP), which promotes sustainable rural economies. The Foundation made initial donations of $1 million each to Global Action for Children and Doctors Without Borders.

The website for The JPRSF is up and running. For more information or to make a donation to The JPSRF (The Jolie-Pitt Superior Race Foundation), please scroll down… You didn’t really fall for that, did you? If you did… guess what? You are an April Fool!

For previous April Fool’s Day items, check out the following:

2010 World’s Most Famous Couple is Splitting Up