We are hearing that he is considering a very sneaky strategy for protecting his wealth. He may divorce his wife for the sole purpose of shielding half his assets from the plaintiffs! The actor needs to trust his wife completely in order for this arrangement to work.

Will she go for it?

She’s enabled him for years and she is really upset that their entire fortune could disappear, so she will agree to whatever plan will help her keep the money. There are actually two goals here: Keeping the wealth and creating two sympathetic figures. They’re going to milk all the sympathy they can from portraying her as the long-suffering wife who is now facing life on her own. He’ll get sympathy, too, for having to deal with a divorce at the same time as his legal settlements. Plus some people will feel bad that he is losing “all” his money because of the lawsuits. 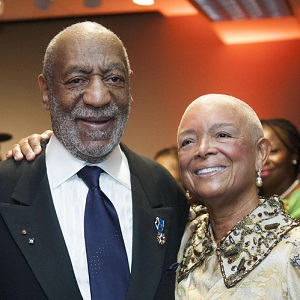 Three years ago, when Bill Cosby was facing sexual assault accusations from OVER FIFTY WOMEN, Blind Gossip told you that he and his wife Camille were considering divorce to protect their assets.

Well, they waited until he was convicted in a court of law of assaulting three women, but that divorce is finally coming!

Will it be too late to protect their assets? We certainly hope so!

Bill Cosby deserves to get wiped out in civil judgments. Camille Cosby stood by her husband and attacked those victims to protect her fortune, so we have no sympathy for her, either. Camille Cosby can go cry in the corner with Harvey Weinstein’s wife, Georgina Chapman. They both stayed married to men they knew were monsters in order to hold onto their money. Complicit, complicit, complicit.

It appears as Camille Cosby has had enough of her convicted husband as recent reports indicate that the couple is quickly heading for divorce with the long suffering wife allegedly taking the first step.

Camille Cosby, 74, has left the couple’s Pennsylvania mansion, leaving the fallen comedian “pleading with her to return.”

“He literally is home alone,” an insider told the publication before stressing that the two now live separate lives. “She even took the staff with her!”

The site specified that she settled herself into the couple’s Massachusetts hideaway with their chef, multiple drivers and a house manager. Also, she reportedly had some family support as their three grown kids joined her in leaving. They allegedly have not visited their 80-year-old father, Bill, in months.

This all comes a couple months after the infamous sexual predator was convicted of drugging and sexually assaulting Andrea Constand in the very Cheltenham, Pennsylvania, estate that Camille fled. The former TV dad is confined to the space and is reduced to wearing an ankle bracelet to track his whereabouts.

Notice the spin about how she and the children left him before the trial? Camille Cosby is playing the martyr and manipulating the separation timeline for the divorce.

The only people who are truly “long-suffering” in this story are the fifty victims Bill Cosby drugged and assaulted. We sincerely hope they receive both justice and restitution for their suffering.

If you guessed this one correctly when it was first published years ago, good for you!