[Blind Gossip] There’s been lots of chatter about the divorce of this famous news guy, and speculation as to his involvement with a prominent female reporter.

Well, we have the inside story!

Male Newsy is getting divorced, but his divorce papers don’t say anything about how faithful he was.

Female Newsy is still married and pretends to be a devoted wife and mother.

The two of them are definitely having an affair. And it has been going on for years!

They have even – very quietly and very secretly – taken their relationship to the next level.

The two newsy lovers have actually rented a Manhattan love nest together!

Since he was living in Connecticut and she commuted from Westchester, having this place together is practically a professional obligation, right? It makes it so much easier for them to rise early and commute to work together.

They just had the place fully redecorated by a professional decorator. It’s really nice. And they were both there to pick out fabrics and select the countertops together. This is an old blind item from 2013, but today is the day it gets SOLVED!

Mika Brzezinski and Joe Scarborough have been having an affair for YEARS!

Your friends at Blind Gossip told you way back in 2013 that they even have an apartment together!

Mika’s divorce was just announced yesterday, clearing the path for the two of them to come out publicly as a couple.

We’re not sure when that will happen… but we do expect it to eventually happen! 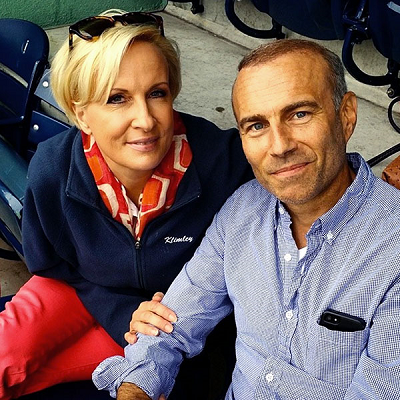 An MSNBC spokesperson confirmed the news: “Mika’s divorce was finalized in the past year. She’s really grateful that it was done amicably and in private.”

“This has, of course, been a painful time for her family,” continued the spokesperson. “So right now she is focused on her two teenage daughters, and on continuing to heal.”

Brzezinski, 49, and Hoffer, who wed in October 1993, are parents to daughters Carlie and Emilie.

Congratulations to EVERYONE who got this one right back in 2013!

We look forward to Mika and Morning Joe coming out as a couple!