[Blind Gossip] They changed their minds and picked the athletic one. Now there’s conflict in this couple.

He wants to move their

primary residence to the opposite coast so he can take the new job.

She wants to keep their primary residence where it is now for the sake of her kid/s.

She told him that he should get used to commuting every weekend. We didn’t go all out on this blind describing the morning talk show scenario because the official announcement was still a couple of weeks away and we were asked by our source to keep it subtle.

We just mentioned “the athletic one” (a reference to a previous blind item) and focused on the impact the decision was having on his relationship.

Then somebody somewhere else blabbed and it was all over Deadline and The Hollywood Reporter and TMZ and RadarOnline an hour later. But if you check the time stamps, BG was first!

Michael Strahan has been selected as the new co-host of the television morning talk show Live with Kelly, alongside Kelly Ripa.

His hosting duties will begin on September 4, 2012, when Live kicks off its 25th season.

There are lots and lots of kids involved here.

Michael has 4 kids, two from each of his two previous marriages. We don’t know if he has any other children or if his current children have half-siblings or step-siblings.

Nicole has 5 kids with Eddie Murphy, and those kids have 3 half-siblings from Eddie Murphy’s relationships with 3 other women (one being spice Girl Melanie Brown). 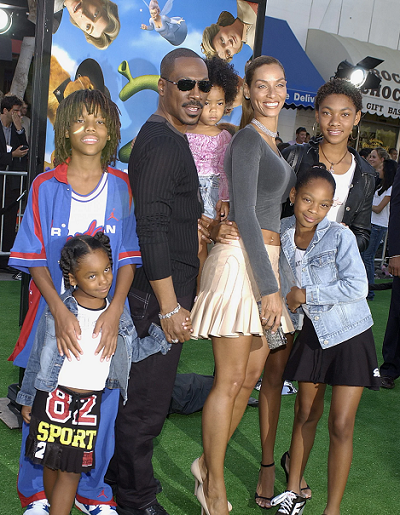 Michael Strahan is currently a football analyst on Fox NFL Sunday, and also a host for Pros vs. Joes alongside fellow Fox football analyst Jay Glazer. The Fox job films in LA, and thus presents a commuting challenge. Michael recently listed two of his homes in the LA area for sale, but Nicole wants to stay in Los Angeles.

Sure, he could commute to New York for the Monday-Friday gig, and then come home to LA every weekend, but we can’t imagine that lasting long. Three jobs, two coasts, one fiancee, and 75 kids adds up to one big mess.

Lots of you got this right (especially after it was splashed all over other sites). Emilymommy was first! Congratulations, Emilymommy! Well, it’s over! Michell Strahan and Nicole Murphy have broken their engagement.

Most sources have her breaking up with him on August 1. According to her rep, Nicole blames “distance” for the eventual split. We told you that was going to be a problem two years ago!

However, we don’t think that distance is the only reason they broke up. There is some ugliness going on.

Witness the timing of their breakup. Nicole’s rep announced that she had ended her five-year engagement to Michael on the same day – and at the same time – that he was inducted into the NFL Hall of Fame! 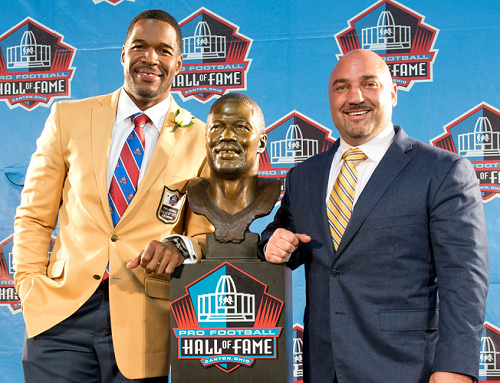 That’s aggressive. Then, when Michael took the stage to accept the HOF honor, he said, “This has been the best weekend of my life” – even though he had just split with his fiancee within the past 24 hours!

If it wasn’t for the aggressive timing of the announcement, we would have sworn that they were going to keep quiet on this one.

When his first marriage broke up, Strahan’s ex-wife accused him of abuse, infidelity and ignoring their twin daughters, and he swore he was never going to go through that sort of ordeal again. 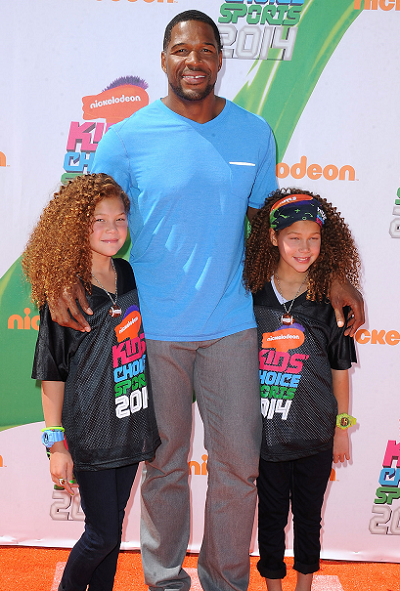 We also didn’t think you would see dirt spilling from Michael and Nicole about their breakup because they are not married, she is very savvy about preserving her public image, and he is now a nationally-known celebrity.

However, given the little swipe that Nicole made at Michael on his HOF day, there is clearly some animosity there. We will see soon whether either side leaks any details or accusations about cheating (the most likely explanation for the breakup) or anything else.