[Blind Gossip] This actress and her husband will be announcing their pregnancy VERY soon. We think it will happen within the next week or so. The announcement is being controlled and orchestrated to an unnatural degree. Why? Because the wife is pairing the baby with a business!

She made some noise last year about wanting to get involved in a business venture and did a few interviews. Have you heard a peep about it since? No. That’s because she and her business partners decided that if they were going to do a business geared toward parents, “We all need to be moms or expectant moms first.”

Well, prepare yourself, because that time has come! If you thought that Jessica Alba and Blake Lively were using their status as moms to sell you something, you haven’t seen anything yet! The first marketing campaign will begin after the pregnancy announcement is made. Yes, Jessica Biel and Justin Timberlake are expecting their first child! In fact, Biel is well past the 12-week mark. We think that the TimberBaby will look exactly like the curly-haired tyke in the original post.

Blinders knew early on that Jessica Biel was pregnant. Then last week we told you that the announcement was coming very soon. One week later, some outlets have jumped the formal announcement, so we are simply going to confirm it.

The major magazines are STILL waiting for Jessica’s publicist’s approval. The relationship between celebrity news outlets and publicists is sometimes a frustrating one. Many of the majors had confirmation about the pregnancy a week ago, but Jessica’s publicist refused to give them permission to run the story.

RadarOnline respectfully waited until the 12-week mark, and then jumped the publicist’s official gun, so they get credit for breaking the story. From RadarOnline:

The speculation can stop: RadarOnline.com has exclusively learned that Jessica Biel is indeed pregnant!

A pal close to the 7th Heaven star revealed the exciting news after weeks of feverish speculation and baby bump sightings.

“Jessica is at least three months pregnant,” the source said. “And she’s due in April!”

A second source revealed that the actress hasn’t had it easy getting pregnant in the past.

“Jessica has had tense times in the past when it comes to having a baby, so it is not surprising that she is staying mum on confirming the news publicly yet,” the other insider said.

This will be the first child for Biel, 32, and husband Justin Timberlake, 33, who celebrated their two-year anniversary on Oct. 19 while vacationing in New Zealand.

But as Radar previously reported, the A-list couple were victims of break up rumors when Biel stopped showing up to support her husband at concerts and during his Saturday Night Live appearance. Now on to the business part.

Jessica Biel started talking last year about opening Au Fudge in Los Angeles. She described the restaurant as a “Soho House for kids.”

The timing of the announcement was a little odd. She didn’t have any children, and she hadn’t announced that she was pregnant. In any case, she made the announcement, did some interviews with major publications, posted some teaser photos, generated some buzz… and then went completely silent about it!

She had to wait for the baby.

Now that baby is coming, so is the restaurant. And so is the restaurant promotion. You’ll see what we mean over the next few months when you pick up a major magazine. Want to interview Jessica during her pregnancy? That’s fine. You can do a story about how well she is eating… and how well you can eat if you go to Au Fudge!

Congratulations to everyone who got this one right! Ravenglass was first! 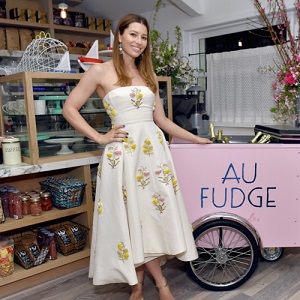 The vanity project that Biel started to cater to chichi moms and kids with high-priced food and arts and crafts NEVER made money and has closed its doors just two years after opening.

Guess that customers just didn’t buy into the “SoHo House for Kids” concept.

(That whole “stolen tips” lawsuit from employees couldn’t have helped either, although we did notice that particular detail went unmentioned in most articles about the restaurant closure.)

In March 2016, Biel and her partners opened the restaurant, which was complete with a neighboring “creative space” for children that included books, wooden toys and optional au pairs to watch kids while their parents dined on dishes like vegan caesar salad, beef short ribs and cheeseburgers.

When Biel, 36, first opened Au Fudge, she told PEOPLE of her vision for the space. “There’s a lot of anxiety in bringing a kid out,” she said in 2016. “Parents are the hardest-working people. I wanted to create a space where they can come in and feel like they’re taken care of.”

Despite the unique concept in L.A.’s fine dining scene, Biel was open and honest about the struggles of entering the restaurant business, and admitted to Jimmy Kimmel in January 2017 that they were having trouble turning a profit.

“[We’re] definitely not making money,” Biel said. “Nobody’s making money in the restaurant business, in my experience, at least not yet.”

However, we are curious to know if if Biel and her partners showed up for the closing of the restaurant dressed as they did for the promotional photos.

Nothing says “kid friendly” and “arts and crafts” like a pink tulle ball gown!

The good news is that the closure of this business frees her up to start working on another baby and another vanity business. We can’t wait! 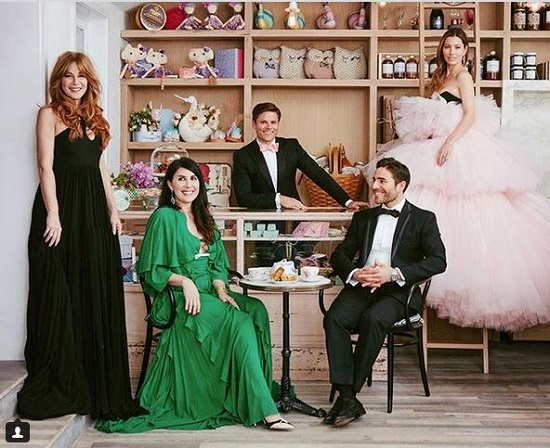