[Blind Gossip] This show and its actors have been nominated for Golden Globe Awards more than once.

One of the stars of this show told this story about what happened to their co-star at last year’s Golden Globe Awards.

Apparently, this handsome and quirky TV actor was so drunk by the end of last year’s show that he was stumbling all over the lobby of the Hilton.

The good news: He is a happy drunk!

Whenever someone (celebrity or not) came up to him to take a photo, he would emphatically yell, “Of course I will take a picture with you! Of course I will! Get over here! Come here!” and then bring the person into the shot, and use one of his long arms to take the photo.

He would hug and kiss them for the photo, and, after it was done and they were walking away, he would yell at them across the lobby, “Hey! Thank you for taking a picture with me!”

He had everyone in the lobby giggling at his antics. He is just a genuinely nice person, and grateful for his success.

He did make it to one after-party, but was so wasted that he literally had to be carried out of the party with one arm around a family member and the other around one of his co-stars.

In case you were wondering, yes, he was there this year, too. Much more sober, and he got through the entire evening standing on his own two feet! That’s how we would describe Ty Burrell of Modern Family at last year’s Golden Globes.

Happy to be there, happy to have won, happy to meet fans.

Ty Burrell is a really talented actor, and Modern Family has given him a role in which he can shine. 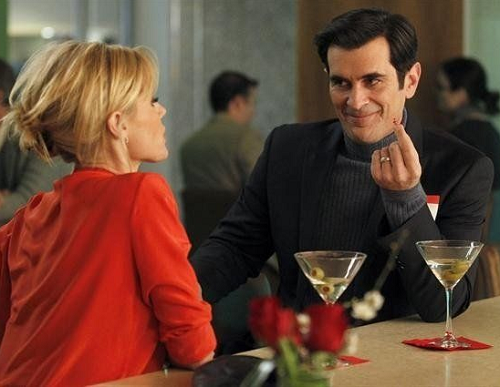 Of course the show has won a ton of awards, but did you know that Ty has had four Emmy Award nominations and one win in 2011 for Outstanding Supporting Actor in a Comedy Series?

He also won the Screen Actors Guild Award for Outstanding Performance by a Male Actor in a Comedy Series in 2014!

Only a few of you got this one right. Congrats to Mellow for being first!