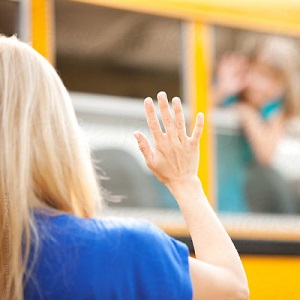 Hold your tears. Things are not as they appear!

They know that the public is not on their side as far as their legal woes are concerned. They are rich enough, though, to bring a full team of publicists over to the house to help with public perception.

Even though there is no contrition on their part, they want public sympathy for their plight. Thus the planted stories about their children being bullied and them heading for a divorce. There was also the possibility of planting stories about an illness or about selling their main home.

So, the stories are for sympathy but they are not actually planning to get divorced?

No. There is no way either of them would give up spousal testimony privilege/marital communications privilege while they are in the midst of a law suit.

Perhaps they are saving the divorce for after?

Whatever happens, our actress will always be the one with the good hair!

[Optional] Do you feel sorry for them or their children? Why or why not? 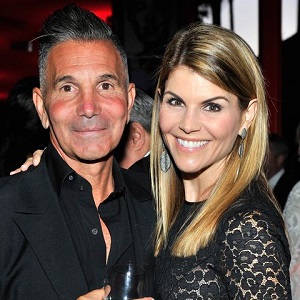 Now that Felicity Huffman has been sentenced to prison in the Varsity Blues college admissions scandal, Lori Loughlin is starting to regret her own choices!

No, not about the whole cheating and bribing to get her ungrateful spoiled brat of a daughter into college.

She is beginning to regret not taking that plea deal she was offered early on!

Lori Loughlin may have second thoughts about pleading not guilty in the college admissions scandal following Felicity Huffman’s 14-day sentence.

A source close to Loughlin told People that the former “Fuller House” star was “aware of Felicity’s sentence and is processing what that means for her.” The insider added of Huffman’s sentencing date Friday, “This has been a rough day. Lori is going to move forward as best as she can, but now she has a little more clarity about what will happen next.”

Huffman, 56, was sentenced to 14 days behind bars after she pleaded guilty to conspiracy to commit mail fraud and honest services mail fraud in May. She confessed to paying an admissions consultant $15,000 to have a proctor correct her older daughter’s answers on the SAT. She wrote that she’d considered the same for her younger daughter but decided against it.

A judge also ordered Huffman to perform 250 hours of community service and pay a $30,000 fine.

Loughlin, 55, and husband Mossimo Giannulli were accused of paying $500,000 to alleged scam mastermind William “Rick” Singer to get their daughters Olivia Jade and Isabella recruited onto the University of Southern California’s crew team despite neither girl ever being a rower. USC put the girls’ enrollment statuses on hold amid an internal investigation into the scandal.

The pair rejected the plea deal that other parents allegedly involved in the case – including Huffman – accepted. Giannulli, 56, and Loughlin then were hit with additional charges of money laundering and conspiracy and would face up to 40 years behind bars if convicted on all charges.

“Her only chance of avoiding jail is to beat these charges. Lori is a smart woman; she understands that. She’s scared and upset, but she’s resolved to be strong and to fight this. She will do what she has to do to protect herself and her family.”

The source admitted that Loughlin “regrets” not taking the plea agreement when prosecutors initially offered it but insisted Loughlin had no idea she did anything illegal when making the payments to Singer’s Key Worldwide Foundation.

“She didn’t understand the entire nature of the charges against her, and she wasn’t even sure if or how she had broken the law. It was very early, and she didn’t have all the information that she has now,” the source said. “Based on what she understood at the time, she made the best choice for herself. Now there is no deal on the table, and she has to have faith that the courts and the prosecution will move fairly and not make an example out of her.”

Felicity Huffman was apologetic and contrite and will do time in prison anyway.

Lori Loughlin was defiant and arrogant and her bribe was 33 times more than Huffman’s payoff, so it is reasonable to expect that she will do even more time in prison.

So, back to the blind item. What about Lori’s marriage? Well, while the couple has been fighting during this stressful time, they made these strategic decisions together, so one cannot really blame the other. This is all about the legal ramifications, and there is absolutely no legal benefit to the couple’s splitting before Lori is sentenced. What happens after the sentencing is another story.

All the sympathy ploy stories (ignorance, bullying, illness, possible separation, possibly selling the house) don’t work. Public sentiment has not been moved. Perhaps it’s because Loughlin, Giannulli, and their obnoxious, spoiled, fake athlete, Instagram influencer daughter have all been so arrogant and defiant? 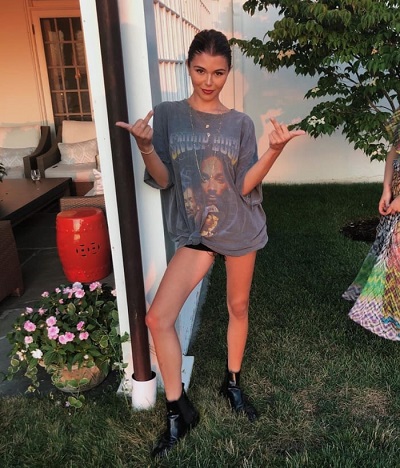 What a charming girl. Defiance clearly runs in the family.

Aunt Becky With The Good Hair is going to prison, yo!

Yes, that was a clue from the original blind item (Loughlin played Aunt Becky on Full House). We also included the words “full” and “house” in the blind item in case you needed a bit more help.

Congrats to TexasHeat for being first with the correct response and for doing such a great job working those clues!

Do you think they have rowing machines in prison? 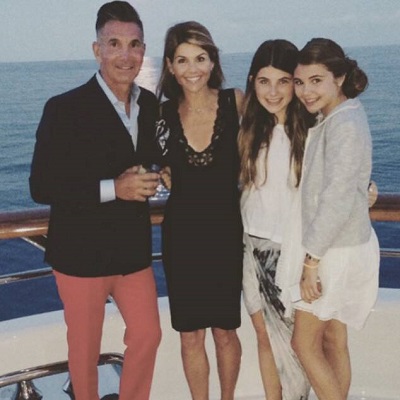